I’m late to the party on this one. No, I haven’t started playing Minecraft nor will I. The game, if you can call it that, seems like a gigantic time suck. It’s the sort of thing I could get into if I had unlimited time on this earth and didn’t feel guilty about such things.

I found this video while poking around Shamus Young’s website. Shamus is a interesting commentator on gaming, game design, programming, and nerdy stuff like that. His community has their own Minecraft server which is featured in this quite impressive video.

Minecraft, for the uninitiated, is a strange open world game focused on building. The graphics are kept very basic. It looks like it could have come out in the early days of 3D gaming.

See what I mean?

The focus is obviously not photorealism. Rather, the focus is on the core gameplay mechanics. This simple graphical style allows for vast procedurally (automatically) generated worlds to be created which means there’s a vast amount of space for players to build in. There are two main modes: a free build mode focused on creative building and a survival mode featuring enemies, health, and resources more like a traditional game.

The server featured in the video, I believe, is running in the free build mode. And the creations of the players are absolutely stunning. Watching the video (and I watched all 11 minutes which is rare as I tend to get bored of these sorts of videos) I was impressed in the same way I get impressed by large, intricate Lego creations. Man, I love Legos… I could go play with them right now…

Woah. No. Back on subject. The minifigs will have to wait. Like until I have a kid or something.

Here are the points I wanted to make in all this. First, building stuff is awesome. I love it. Legos. K’nex. SimCity. RollerCoaster Tycoon. Minecraft. There are tons of awesome building toys out there and they’re wonderful outlets for creativity and expression. Again, I refer you to the video above. Video games are not all about shooting zombies. Okay, survival mode does feature zombies, but… hey! Look at this picture of Lego Chicago! 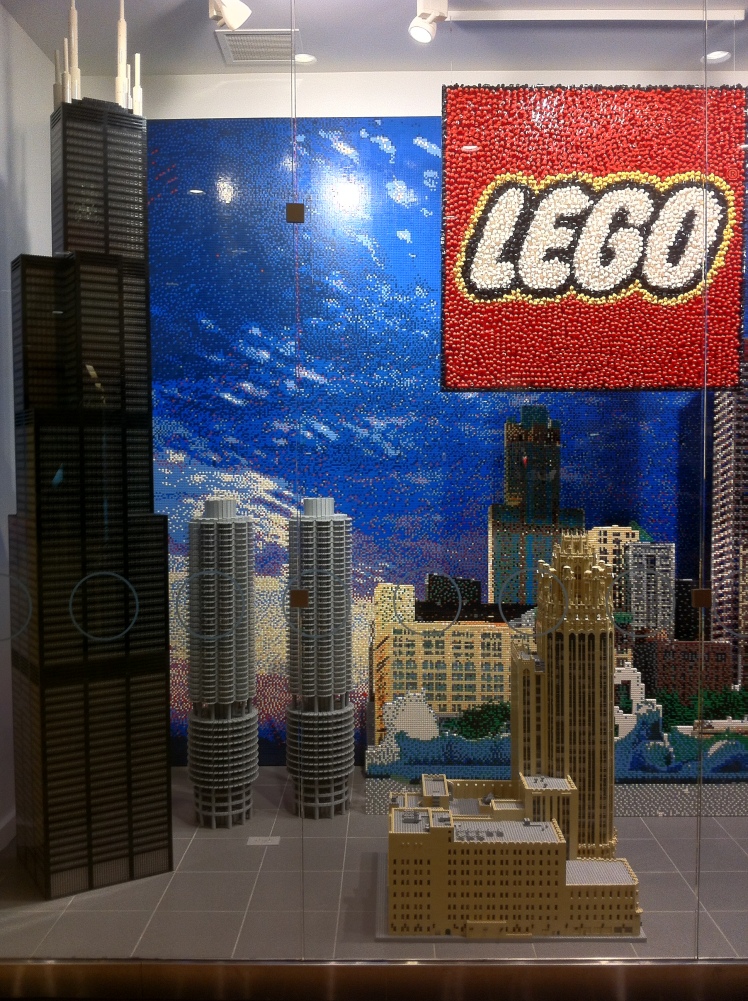 Second point: “primitive” graphics are not only perfectly acceptable, they can actually be a benefit. More basic graphics emphasize the player’s imagination. They also allow for system resources to be allocated to generating that huge world map and allowing for vast construction projects which would be impossible in, say, CryEngine 3 or the latest Unreal Engine unless you’ve got one monsterous computer.

I’m not saying anything new here. There have been lots of people arguing this for years. Gaming has, in many ways, lost some of the soul and imagination it used to possess. Partially that’s because the people who say this have gotten older and lost some of the wonder with which children look at the world. Part of this is the natural maturation of the gaming industry. But a lot of it is the relentless pursuit of presentation and the neglect of substance because that’s apparently what sells. Sad, really.

Watching that Minecraft video brought back memories of exploring more primitive, but more imaginative gaming worlds. It also reminded me of my days messing around with RPG Maker 2000 trying to create a game of my own and never really finishing but having a lot of fun in the process anyway.

While watching I got to wondering if someone could or would make a Bethesda-style open world adventure/RPG game with the Minecraft engine. I would love to explore worlds like that provided there was a story attached. At some point in the future the developer has said he will open-source the engine. Perhaps then?

Anyhow. Now I get the big deal about Minecraft. It’s quite a cool thing. I myself won’t be playing it although I wish I had the time for it or something like it.