I’ve had a personal saying for years now. Printers are designed, manufactured, and possessed by Satan. I hate them and they hate me.

There are, I suppose, good printers. Office printers seem to work well most of the time, but they’re not practical for home use at all. And come to think, the first time I used the printer at my new job I wound up dealing with a paper jam.

There’s a reason that copier smashing scene from Office Space resonates with so many people. Printer/copier/scanners are horrible to us. Consumer printers are particularly bad.

Consumer printers have this sinister business model where the actual machines are sold as loss leaders because you’re going to have to buy extremely overpriced ink as long as you want to use it. According to Consumer Reports, printer ink costs anywhere between $13 to $75 PER OUNCE. How is this not price fixing?

END_OF_DOCUMENT_TOKEN_TO_BE_REPLACED

Net neutrality was big in the news recently thanks to the FCC. I’ve been a big believer in the principle of net neutrality ever since I heard it defined many years ago. Lately there’s been a whole lot of misinformation about what net neutrality is and isn’t thanks to politics.

I’ve seen numerous opinions on social media for and against net neutrality which are basically divided along ideological lines. Conservatives (and libertarians, I suppose) seem to hate it while liberals are applauding the move.

Like a lot of political issues, I think most Americans want the same end goal. We all want to be safe, happy, prosperous, and free. We disagree on how to get there.

All I really want to do is communicate what net neutrality is as simply as possible. The definition has become clouded by the debate over the FCC’s decision and that’s not helpful for anyone. Net neutrality existed as a concept long before the Obama Administration or the FCC got involved. It means something specific and just because some people disagree with the FCC’s move to classify internet service providers as utilities doesn’t mean opponents of that decision suddenly get to redefine the principle.

“Net neutrality is the principle that Internet service providers and governments should treat all data on the Internet equally, not discriminating or charging differentially by user, content, site, platform, application, type of attached equipment, or mode of communication.”

END_OF_DOCUMENT_TOKEN_TO_BE_REPLACED

So the other day I got an issue of Rolling Stone magazine with Pope Francis on the cover. That struck me as odd for a couple reasons.

First, why is Pope Francis on the cover of Rolling Stone? Did he start a band? 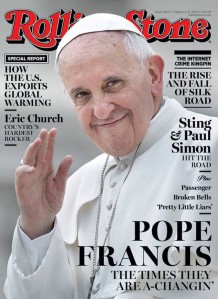 Oh man. That would be hilarious if the Pope started a band. That’s a universe I want to live in.

Second, why am I getting Rolling Stone magazine? I never subscribed. But there is was: my name and address on the sticker.

This has actually happened to me before. A few years ago I got Working Mother magazine for six months.

Yeah. I am not kidding you. Same deal: my name was on it and everything. And believe me, I definitely didn’t subscribe to that one either.

Anyhow, I decided to check my credit card history just to make sure I hadn’t been charged for a magazine I didn’t order. I didn’t find anything about Rolling Stone but I did see a different charge I didn’t recall making.

END_OF_DOCUMENT_TOKEN_TO_BE_REPLACED

Far Cry 3 is a disappointment. It is not the game it could have been or should have been nor does it deserve the perfect and near-perfect scores it has gotten from mainstream game review sites.

Let’s talk a little franchise history. I bought Far Cry 2 back in 2008 under the false pretense that it was made by the same folks as Crysis which I had an absolute blast playing. It wasn’t.

The Far Cry series was begun in 2004 by Crytek but Far Cry 2 was an Ubisoft product. Apparently the Crysis series was enough for Crytek so they sold the IP. Consequently I was initially very disappointed with Far Cry 2. It didn’t feature anything like the highly empowering Nanosuit of Crysis. It wasn’t even very much like the original Far Cry. In fact, none of the Far Cry games relate to each other at all. They don’t even seem to be set in the same fictional universe.

Over time, Far Cry 2 grew on me despite some glaring annoyances with the game design like the infamous respawning enemy outposts, guns that would jam on you at exactly the worst moment possible, the very limited fast-travel system, and the bland, repetitive mission design. Far Cry 2 was trying to be something that no other shooter was. Its themes were ambitious. Its immersive design was laudable but problematic. But I kind of like the game. I even surprised myself by playing it twice through.

Far Cry 2 was good and different enough to get me interested in the potential of a sequel. My excitement for Far Cry 3 grew when I heard director Dan Hay talk about the themes and story arc this game would tackle. Even better: they understood many of the complaints about the previous game and were taking steps to rectify them! This was going to be awesome: a beautiful open-world shooter with a dark storyline about the protagonist’s descent into insanity.

I wish they’d made that game. They got halfway there. Some of it works. Far Cry 3 is a good game, but like its predecessor, its design and storytelling flaws keep it from being a very good or great game. And it could have been.