Last week Disney shocked the nerd world by announcing their intention to acquire LucasFilm and make Star Wars: Episode VII which is due in 2015. That news came right the heck outta nowhere.

My initial reaction (aside from shock) was something like “oh great, Disney’s going to ruin Star Wars now.” And then I remembered the horrible reality in which we live. The prequels happened. Clone Wars happened. Jar Jar Binks is a thing that exists. Oh yeah.

So given that reality and the recent-but-strange return of my optimism, I decided on a different outlook. Y’know what? All joking aside, this might be the best thing that’s happened to the Star Wars franchise since George Lucas decided to stop making movies. Here’s why.

Disney has money. This we know. Well, now they have a few billion less after giving some to George Lucas. But, still. They’ve got mountains of cash. Disney also has a massive amount of capital in filmmaking. They’ve got studios full of creative people and loads of experience getting films made.

All of this is essential to making films. Science fiction films are generally more expensive to make than your average movie so it’s good that the studio has the cash to invest in the films.

In addition to the new movies, we might actually get that Star Wars TV show that’s been kicking around since 2005. I would love that. Ever since SyFy canceled Stargate Universe just when it was getting good, I’ve been wishing for a new sci-fi show to watch. Apparently there are a bunch of episodes written for the show, but the problem has been money. Back in 2010 Lucas said that they couldn’t find a way to make the show for less than $50 an episode and they were waiting (again) for technology to catch up the vision and make the process cheaper. Perhaps with Disney at the helm this won’t be such a problem.

Of course quantity and more money doesn’t necessarily equate to quality. In fact, sometimes it’s the opposite. On the other hand, Disney and Lucas seem like they’re willing to seek out new directions and new talent.

When I went to see Revenge of the Sith in 2005 there was a movie called Batman Begins showing in the theater next door. That movie along with Casino Royal and J.J. Abrams’ Star Trek showed that the idea of rebooting a franchise can be more than just a cynical cash grab. They can shed new light on old characters. Recast beloved stories in new contexts or just give another creative team the chance to tell the same story in their unique voice.

In reality we’re supposedly getting an Episode VII. And VIII. And IX. Okay. Some good could come of these as long as they don’t get overly ambitious and just try to tell a good story in an appropriate swath of the Expanded Universe. I don’t expect masterpieces. But this is a great opportunity for fresh new takes on the franchise. They just need to make sure to not hire some stary-eyed fanboy to do them. Actually, Disney is currently in talks with X-Men: First Class director Matthew Vaughn who seems like a good choice for the task at hand. Here’s hoping they give the job to the right person.

But if the whole thing does crash and burn and they’ve milked the Star Wars utters dry after Luke Skywalker Meets the Avengers, then they can reboot it and we can get back to great Star Wars stories.

As is the case with most nerds and Star Wars fans, I have love/hate relationship with George Lucas. Sometimes when I hear his name it conjures images of a young, pioneering filmmaker fighting heatstroke and budgetary concerns shooting on location in Tunisia. That guy was cool. He worked hard for something that nobody thought would succeed. He used models and practical effects. He took advice from others. And best of all, he knew that story was paramount. Don’t believe me? Watch this.

And that brings me to the other George Lucas that I think of. An older, fatter, less cool guy who seemingly disregarded everything his younger self had to say. This was a top comment on the above YouTube video:

“I’m very well convinced this person interviewed is not the same person who made those awful CGI infested, horribly written and acted Star Wars prequels as well as making those stupid unnecessary changes to the Original trilogy. My conclusion is that he was either adbucted [sic] sometime in mid 90’s and impersonated by an imposter [sic] who resembles him, maybe an evil twin brother, or a demon possessed him.”

You know what? For once a YouTube comment rings true. Actually, my theory is that the George Lucas who made the prequel trilogy is an evil clone, not an evil twin brother.

Clone George certainly seems to have fallen off the wagon of good filmmaking in recent years. With the release of the poorly-reviewed prequel trilogy and the poorly-received Indiana Jones and the Kingdom of the Crystal Skull, Lucas became a man whom some blame for reviving and ruining two classic franchises he helped create. Some have pointed to these works (especially to the prequel trilogy) to say that Lucas was never that great a filmmaker to begin with, but I have to disagree. There’s a reason that the original trilogy has a place in the hearts of so many and that is because it’s genuinely good (among other reasons). Lucas had a lot to do with that even though his role might have been exaggerated in recent years. One thing’s for sure: without him the beloved franchise wouldn’t exist in the first place.

Clone George Lucas had (from what I understand) basically total creative control of the prequel trilogy. Given the way those films turned out, it’s probably best that he’s taking more of a backseat in future Star Wars productions. Lucas wrote the treatments for the upcoming film trilogy and hopefully that’s the most input he’ll have over the process. Lucas has proven to be a pretty good ideas man in the past. You can see the outline of a great story in the prequel trilogy. He just struggles with the nitty gritty of writing those ideas into a script and directing actors effectively. A new trilogy plotted at a high level by Lucas but written and directed by others could be really exciting to watch.

Speaking of George Lucas, one of the worst things he’s done aside from the prequels is to keep changing things in the original movies ad nauseam! From the first simple retcon of the 1977 movie’s title to the horror of the Blu-ray releases (and that’s not even mentioning the inevitable 3D release), the man just can’t leave well enough alone. For proof, see this extensive list of changes made to the movies in re-releases.

Some of the changes are just cosmetic – supposed “improvements” to the visuals using modern day computer graphics. A lot of people hate these changes and some others find them harmless. It’s the story changes that really irk people: the most heinous and well-known of them all is Greedo shooting first instead of Han Solo in A New Hope. And that’s not just nitpicking from overly-invested fans. It really does have an impact on the story and character arc of Han Solo throughout the trilogy. 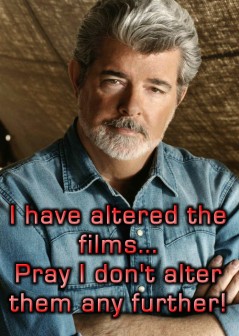 But here’s the real kicker: even if you want a Star Wars without these changes, you can’t get it. It isn’t like there’s a “Director’s Cut” and a “Theatrical Cut” version you can buy. No. The only versions you can buy on Blu-ray and DVD are significantly altered. I actually don’t own any of the Star Wars films for this reason. The last time the original trilogy was released without the offending changes was on the 2006 DVD boxed set but unfortunately those versions were low-resolution with lackluster picture and sound quality.

The best thing about Lucas constantly messing with the films is that the updated versions do look nice. You know how you can tell when a movie’s from a certain era just by looking at it? The first time I saw the HD version of Empire Strikes Back I couldn’t tell it was shot in the late 70s and early 80s. The colors were vibrant, the contrast was great. It just looked really, really good. Similarly, the audio quality has been improved throughout the years. Personally, I have no problem with these kinds of changes. It’s the story changes and the extraneous silly stuff that really irks me and a lot of other fans.

Now with Disney in control of the property, will they do what fans have been wanting for years? Will they release an unchanged original trilogy with the proper restoration it deserves? Are you listening Disney? There’s money there, guys. You could even use that stupid “Disney vault” ploy to get us to buy it.

Remember, no matter what happens, it can’t really get worse.

Well. No. That’s not true, is it? That’s a failure of imagination.

Let me put it this way: it probably won’t get any worse and if it does it’ll be super entertaining.